Dr. Evans moved to Sierra Vista when he was 12 years old. 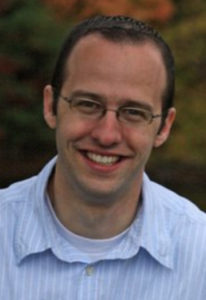 He attended Buena High School, graduating in 1999. Dr. Evans served a two year mission for his church in Seattle after high school. He then attended Eastern Arizona College where he met his wife.  They were married in 2004 and now have five children.  After EAC, he transferred to Western New Mexico University and graduated with a Bachelor’s of Science degree.  Following graduation he and his family made the long trek to Indianapolis where Dr. Evans attended Indiana University School of Dentistry.  He graduated with his D.D.S. in 2012 and has worked at Sierra Vista Dental since that time.

Dr. Evans enjoys spending time with his wife and kids. When he isn’t with them or at the office, you’ll find him in the garage working on cars. Classic cars have always been his passion and he started restoring them during high school.  His high school car was a 1964 Chevy II with a 327 cubic inch engine. When he and his wife first got married they had a 1957 Chevy Bel Air with a 327 and a 3 speed manual transmission. That car was later sold to buy a more family friendly, yet not as exciting, vehicle. His current project is a 1964 Chevy Corvair.

Check back soon to learn more about Dr. Michael Leavitt!

Sonia graduated with a bachelor of science in Dental Hygiene from Northern Arizona University in 2011. She started as a dental assistant and some front desk. She has enjoyed being a hygienist and interacting with her patients, especially the ones she has gotten to know over the years. Her biggest goal is to give her patients the best care possible and be compassionate to their needs. Sonia has been married for over 5 years and has a daughter and a chocolate lab. When not at work, she enjoys being a mom to her baby and hanging out with family. She loves to watch sports and all things Disney.

Stacy Degan is a hygienist at Sierra Vista Dental.  She has been with us on and off since 2007.  She graduated from Clark College in Vancouver Washington as a hygienist in 2000.  Stacy has lived in Arizona for 12 years.  Stacy believes that educating her patients about oral hygiene is one of the most important parts of her job.  She loves being a hygienist.  In her spare time Stacy is often found enjoying the great outdoors with her family.

Check back soon to learn more about our friendly dental team!

Your request has been sent -- we will be in contact with you shortly.
There was an error! Please phone our office.